Please see the article that is a letter from Susan Arnett, our HOA president. This is her last update to all homeowners and contains the wrap up information for our community this year. Huge thank you to Susan for her steady leadership.
As Susan mentioned, the pool and tennis courts will be closed this Thursday and Friday for repair work. Date for pool closing is now Sept. 13. Posted on FaceBook as well.
HFPOA Board Meeting on 9/2 6pm via Zoom - agenda posted on FB and Web page 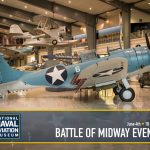 Join us as we commemorate the 76th anniversary of the
Battle of Midway, Monday, June 4, at 10 a.m with Retired U.S. Navy Capt. and Midway scholar Kevin Miller.

The event will also include a showing of the film, “South Dakota Warrior,” about Lt. Cmdr. John Waldron, who was killed in action while commanding Torpedo Squadron (VT) 8 at the Battle of Midway and the unveiling of a significant artifact recently donated the museum.